If you’ve been keeping up with men’s hairstyle trends over the past few years, you’re familiar with styles like the undercut, the pompadour, and the side part. These styles are all throwbacks to the retro era of the fifties, where every gent’s head was covered with a generous dosage of pomade.

Vintage-inspired styles like these also take the hair out of the face and in a more vertical direction. This is especially true for styles like the pompadour and the quiff. None of these styles feature a fringe, or bangs.

That might not be obvious at first, but the absence of a fringe has characterized trendy men’s hairstyles for the past couple of years.

As we’ve been watching the latest trends to see where 2016 will take men’s hair, we’ve been seeing the fringe making a comeback. More styles are including this essential component of men’s hair, and we’re expecting to see it dominate men’s hairstyle trends in 2017.

There are several great styles that feature the fringe, and today, we’re bringing you the angular fringe haircut. Read on to find out more about this style and learn how to get it.

What is the angular fringe haircut?

The angular fringe haircut is a style in which the sides are kept somewhat short and the top is left relatively long. This “short on the sides, long on top” concept is the same one that styles like the undercut and pompadour are based on.

The important difference is that the fringe is left hanging over the forehead. It’s also cut at an angle to give a unique texture. The result is a fringe that’s cut at angles, hence the name.

What do I need for the angular fringe haircut?

This is a medium-length style, so roughly 2 to 4 inches is recommended. You’ll want the bottom of your fringe to rest right above your eyebrows so it doesn’t get in the way of your vision.

If you’ve had an undercut or similar style before where it’s short on the sides and long on top, you can use those measurements for the angular fringe haircut.

How to Get the Angular Fringe Haircut

First, decide how long you want the sides and top to be. You can go as short as a #1 for the sides or even request a skin fade. A #4 is a fairly medium clipper setting that leaves about a half inch of hair. You can go up or down from this setting as you wish.

Now for the fringe. Ask your barber to cut your bangs at an angle so that they’re not even across the bottom. Different lengths is the key here. It’s also important to bring in pictures since the angular fringe haircut has several different variations.

You can even ask your barber to cut the ends with a razor for a choppy texture. The result should be a messy, angular fringe with lots of texture and visual interest.

Still hesitating? Check the photos below: 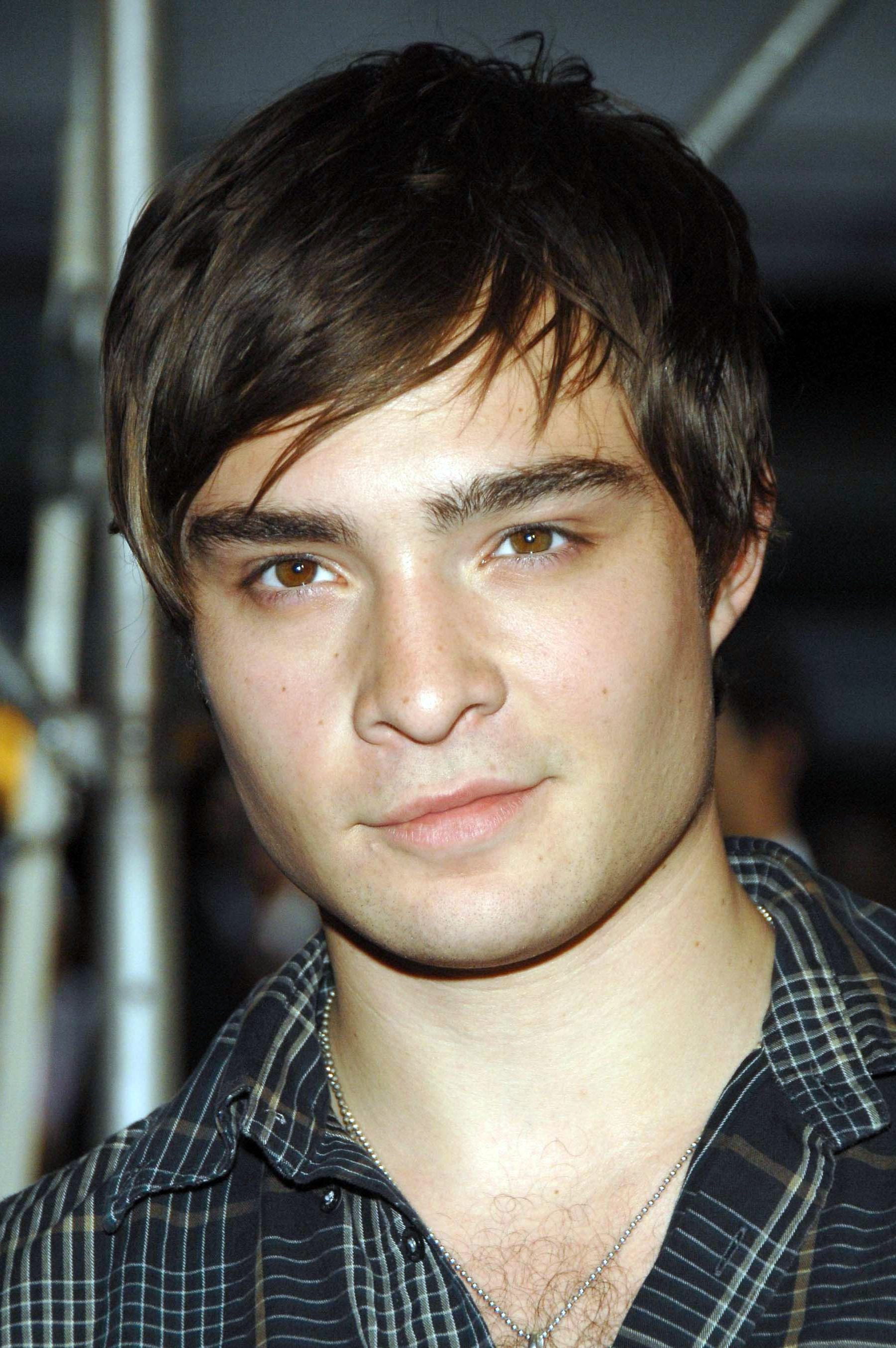 As fancy as the name sounds, the angular fringe doesn’t always need special styling. If you have a mid-length haircut with a wispy fringe like Ed Westwick’s, just wear it swept to the side to get the angular look. 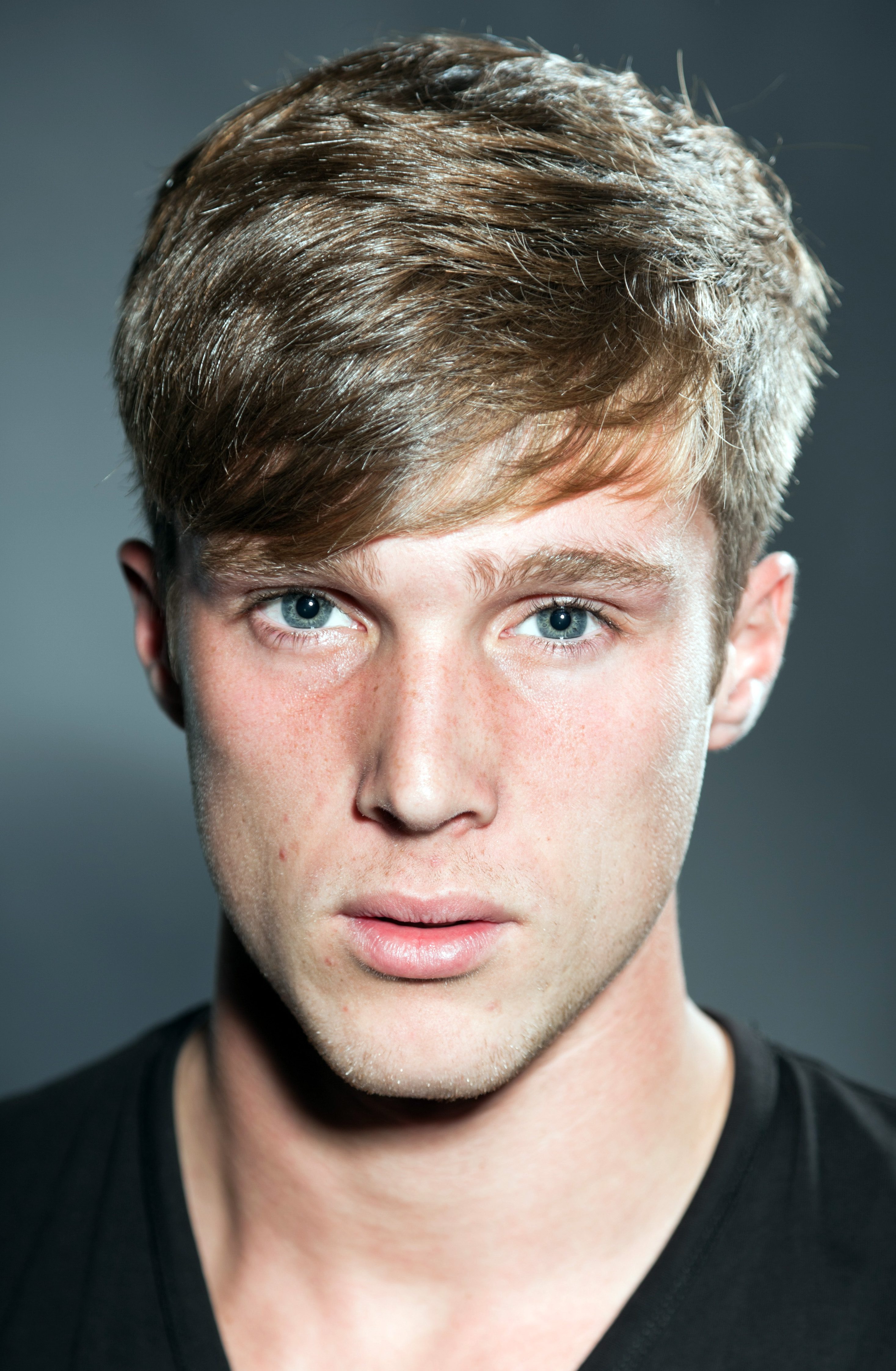 If your fringe is going to be the focal point of your hairstyle, make sure to give it a stylish texture. We like the piecey look of these bangs and how they stylishly hang at an angle over the forehead. 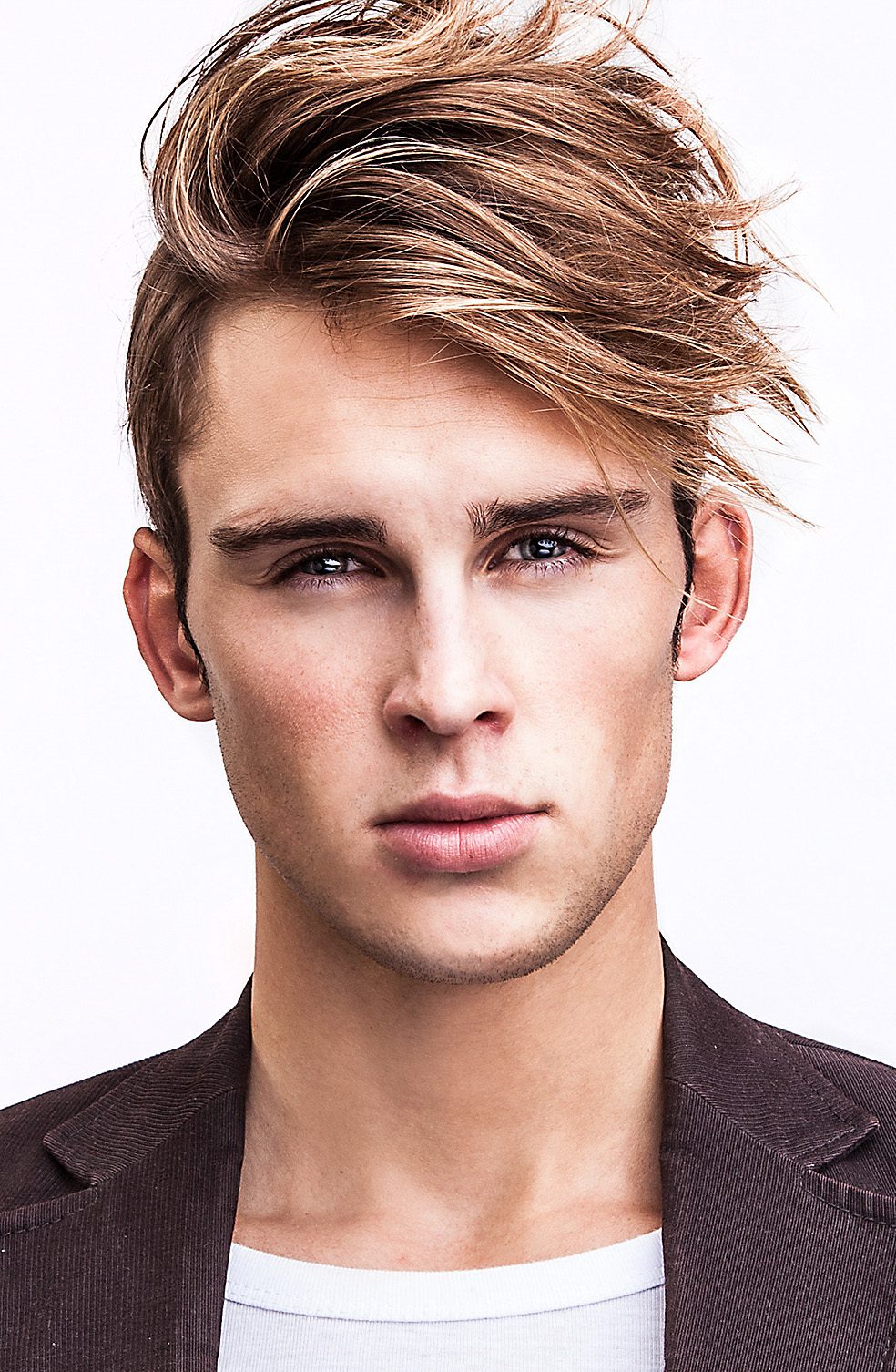 Of course, some fringes are fancier than others and will require a bit of styling prowess. This looks super edgy and cool with its choppy cut and messy side-swept style. 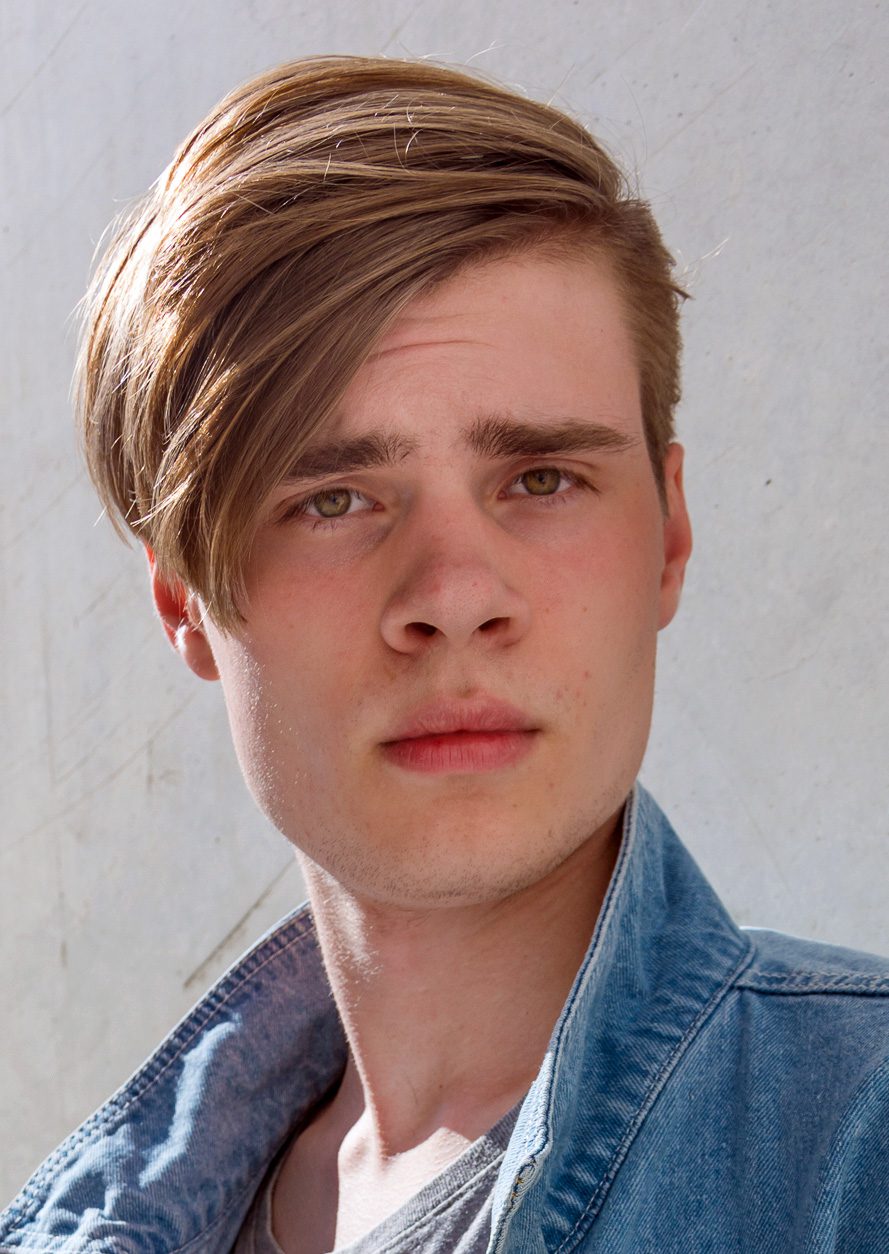 We’re getting an ’80s new wave vibe from this heavy angular fringe, which is a play in contrasts with its lopsided look, thick top, and undercut. 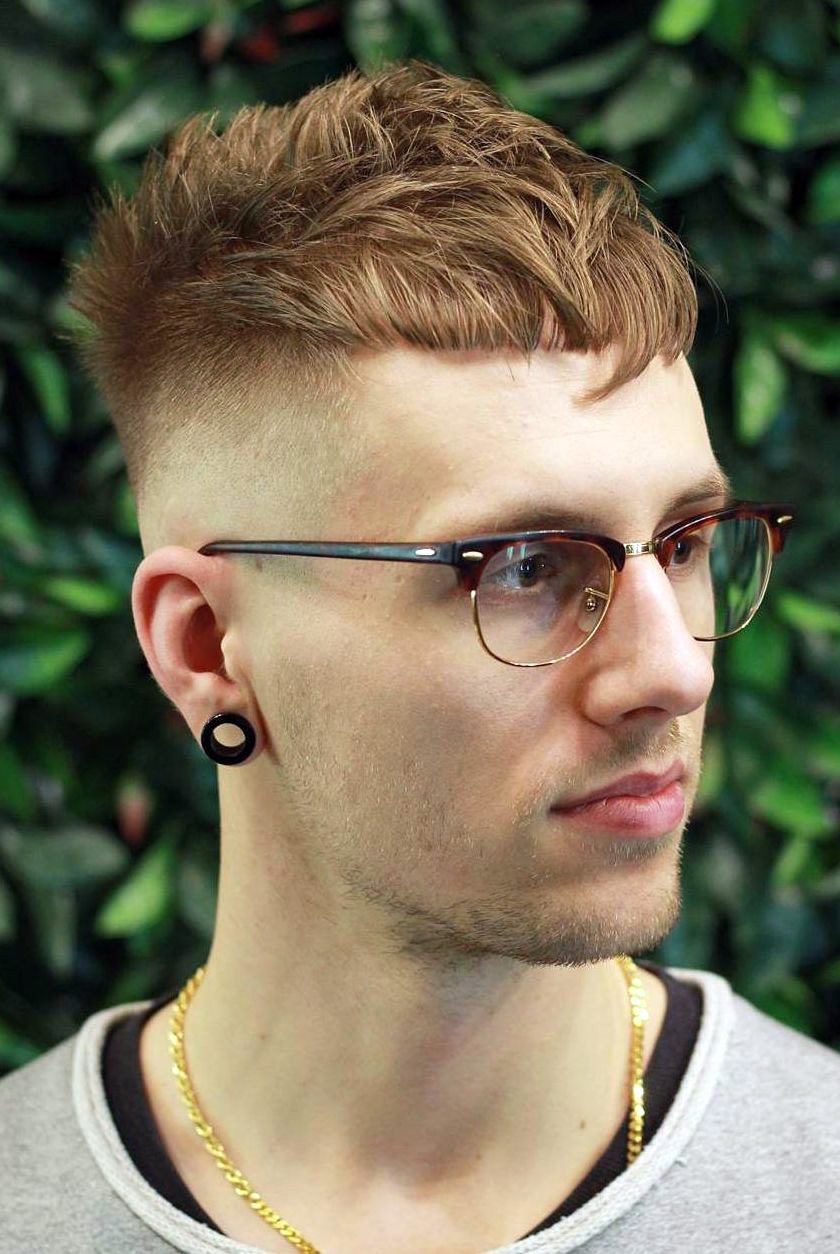 Having a short ‘do with a skin fade doesn’t mean you can’t rock bangs. Try this Caesar cut and give the fringe a bit of an angular look by leaving out some uneven strands. 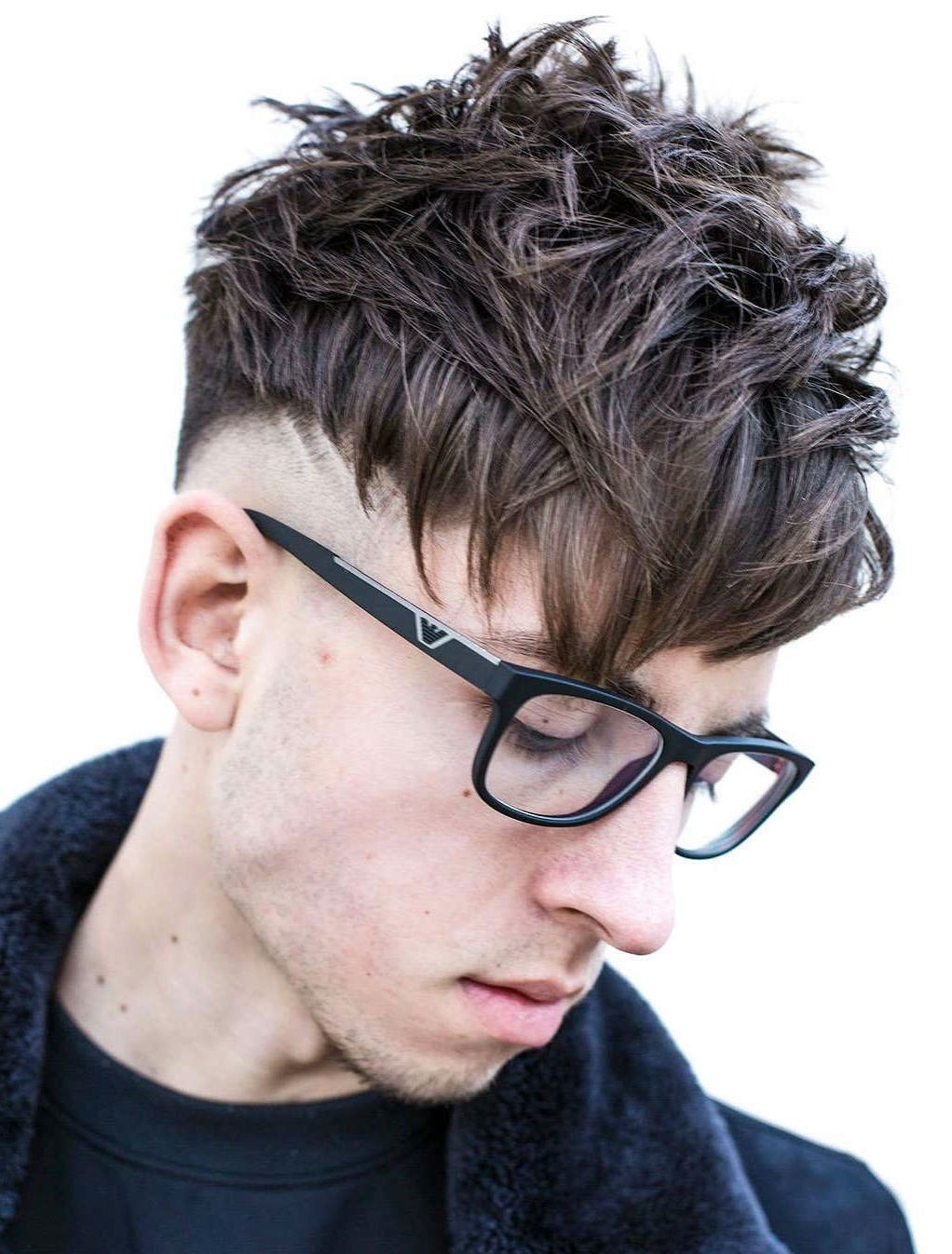 Pocky Strands All Over the Top

Here, the fringe is cut at a sharp angle and features a choppy texture, which is repeated all over the messy top. A majorly edgy look overall! 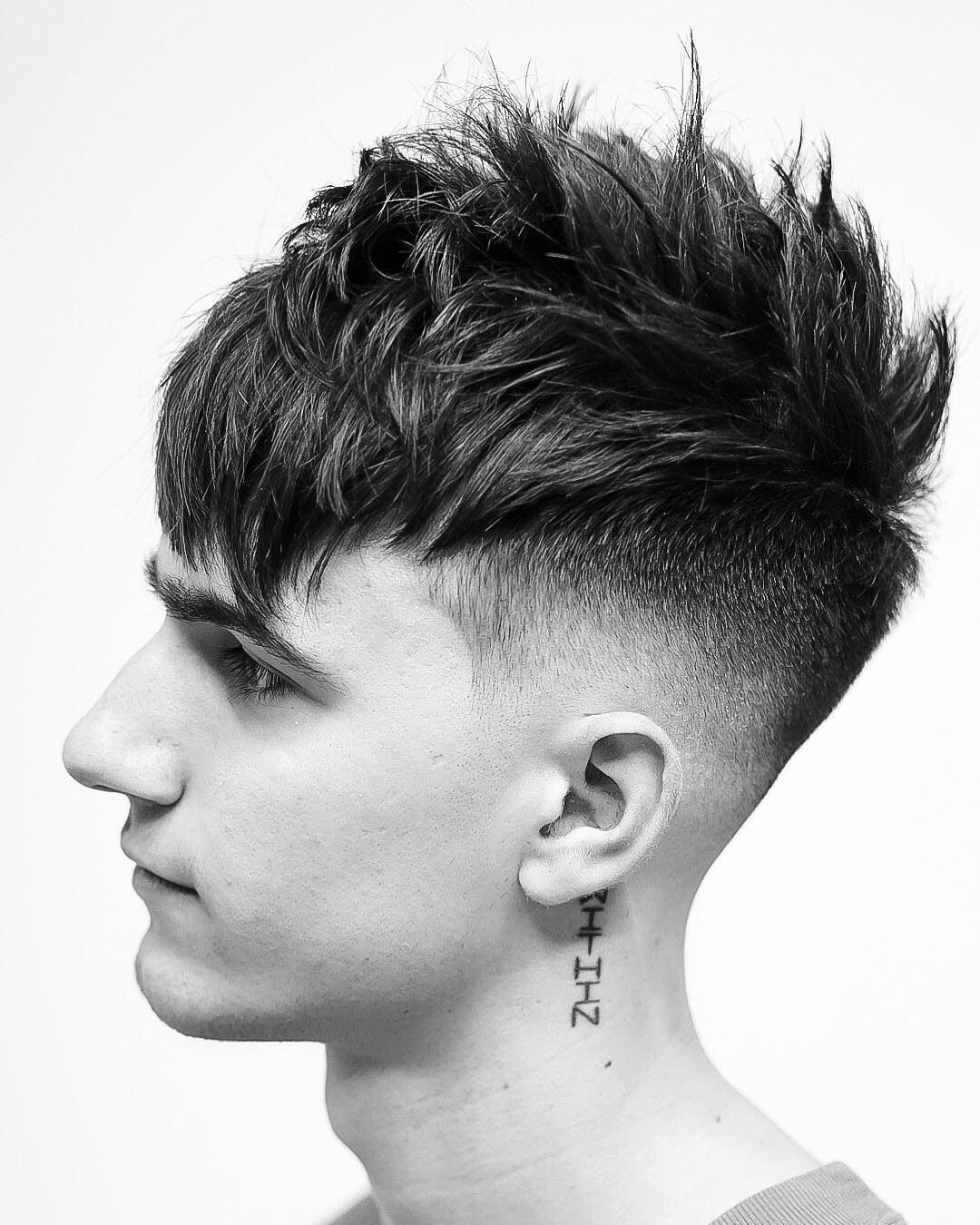 Here’s another hairstyle that will unleash the punk star in you. Get a choppy angular fringe and a longer top with an undercut, then muss all that hair up. 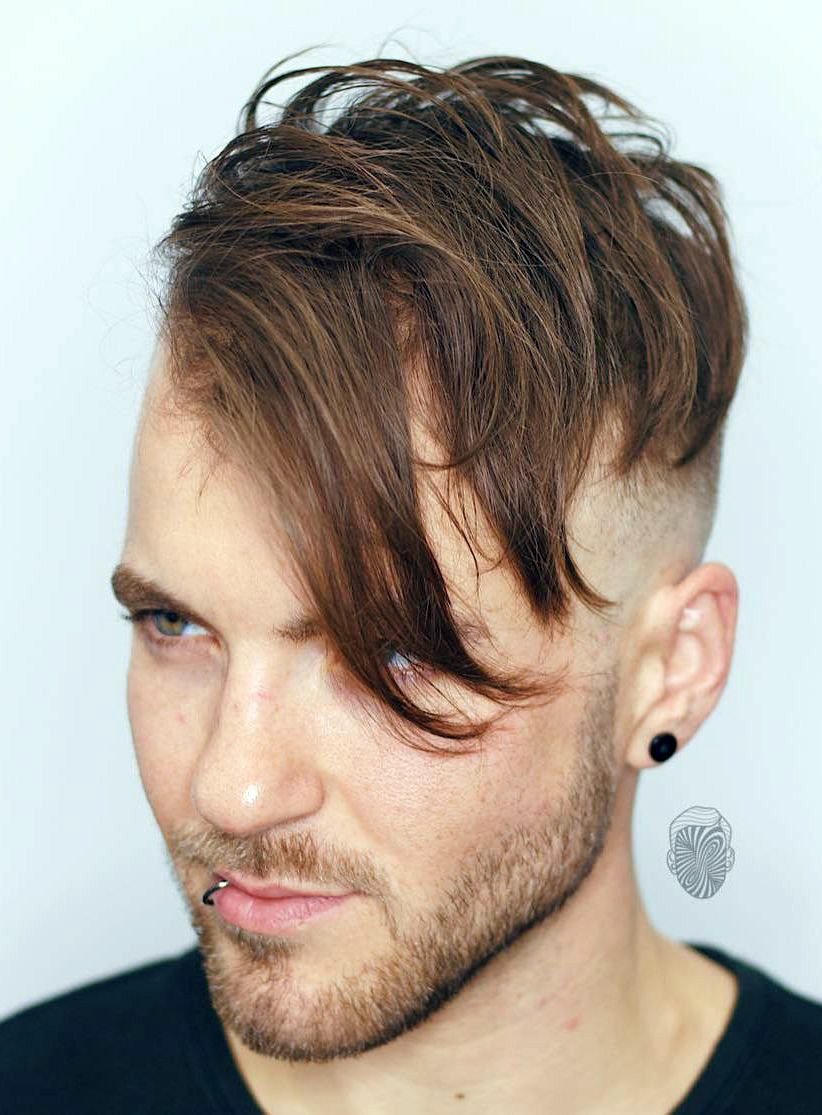 Now on to an even punkier hairstyle. This features a fringe that reaches below the eye, contrasted with a bald fade. We’re thinking, with a load of hairspray, this could do double duty as a mohawk. 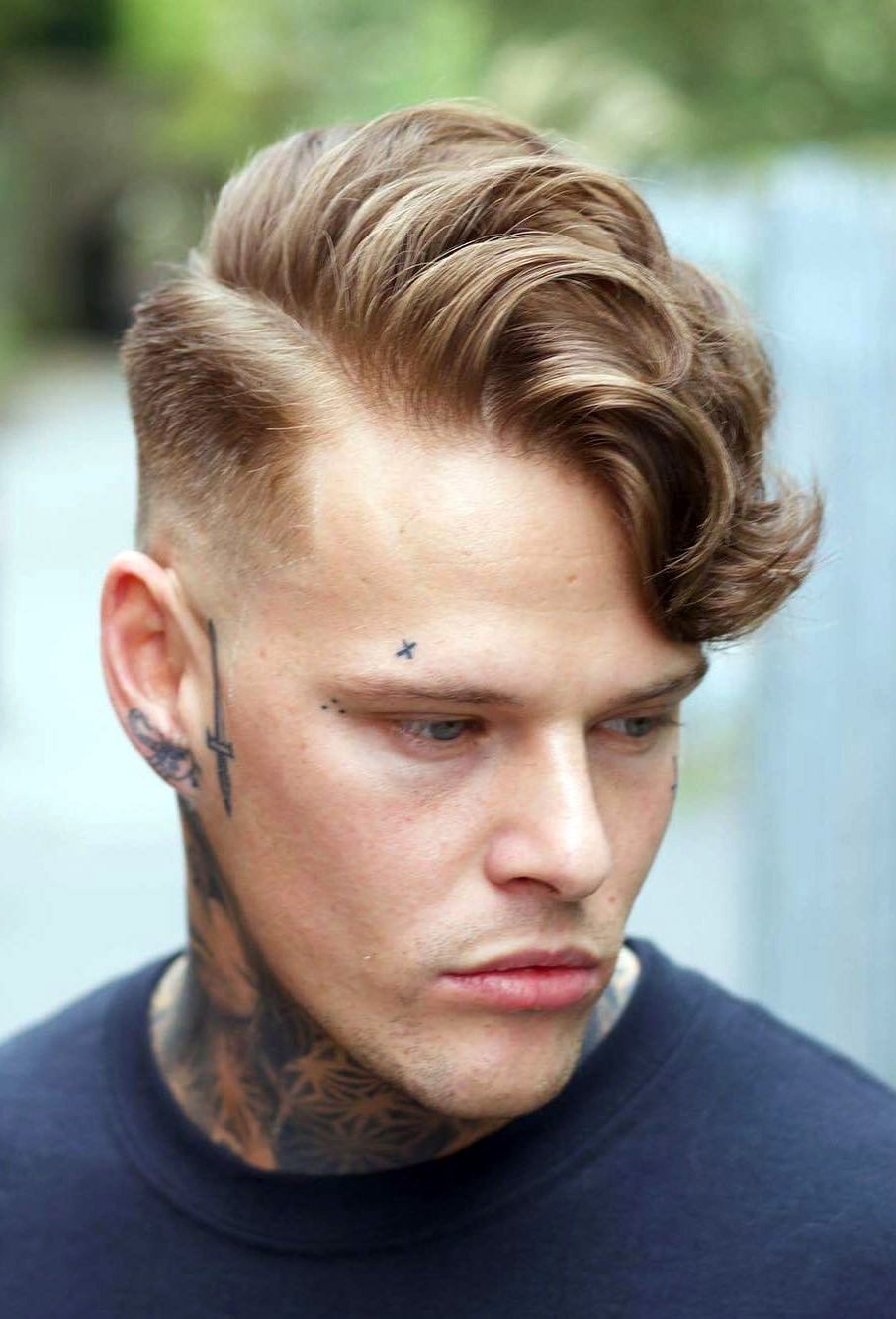 Side Part with Flowy Fringe

Curls are cute but, as you can see here, they can also be badass. All those curls at the top flow down into a side-swept fringe, while the fade provides an edgy contrast. A long fringe becomes more pronounced when paired with a temple fade. And when you add a messy wavy texture to the mix, you get this very punky look. 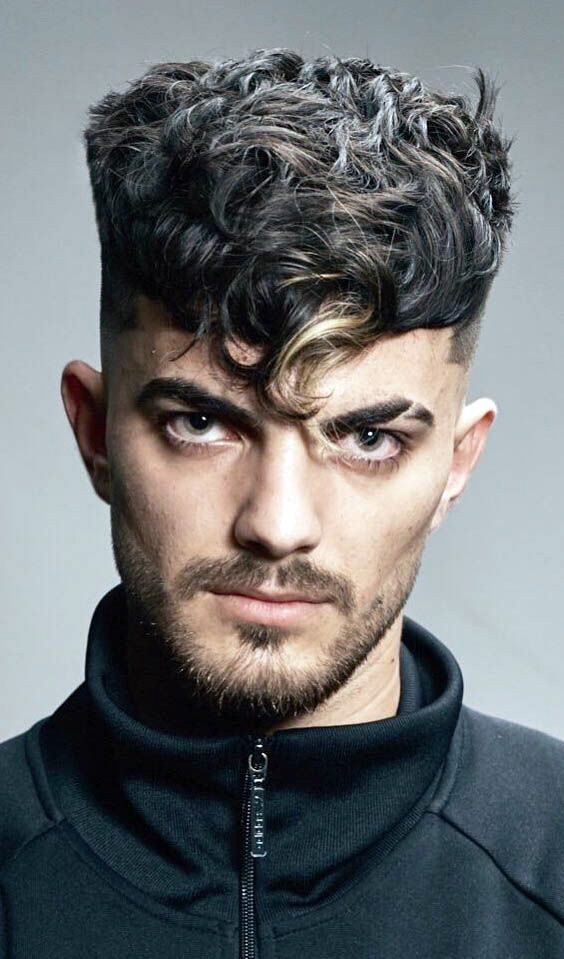 If you want to make a bold statement with your thick hair, try this style which looks like a flat top but messy and curly. Then add an elephant trunk to accentuate the fringe. 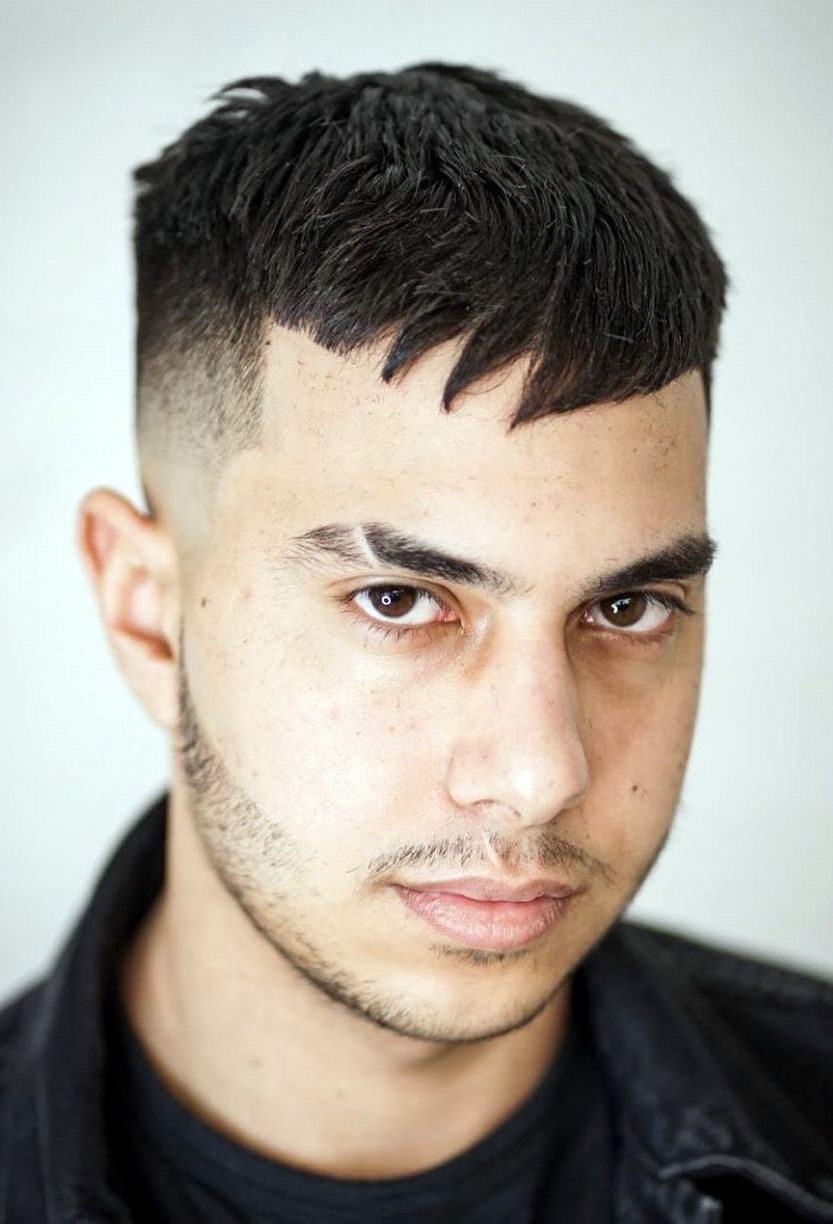 You can go for a statement fringe while keeping the rest of your look simple. Here, the bangs are cut at an angle and separated into sections, adding a touch of boldness to an otherwise low-key look. 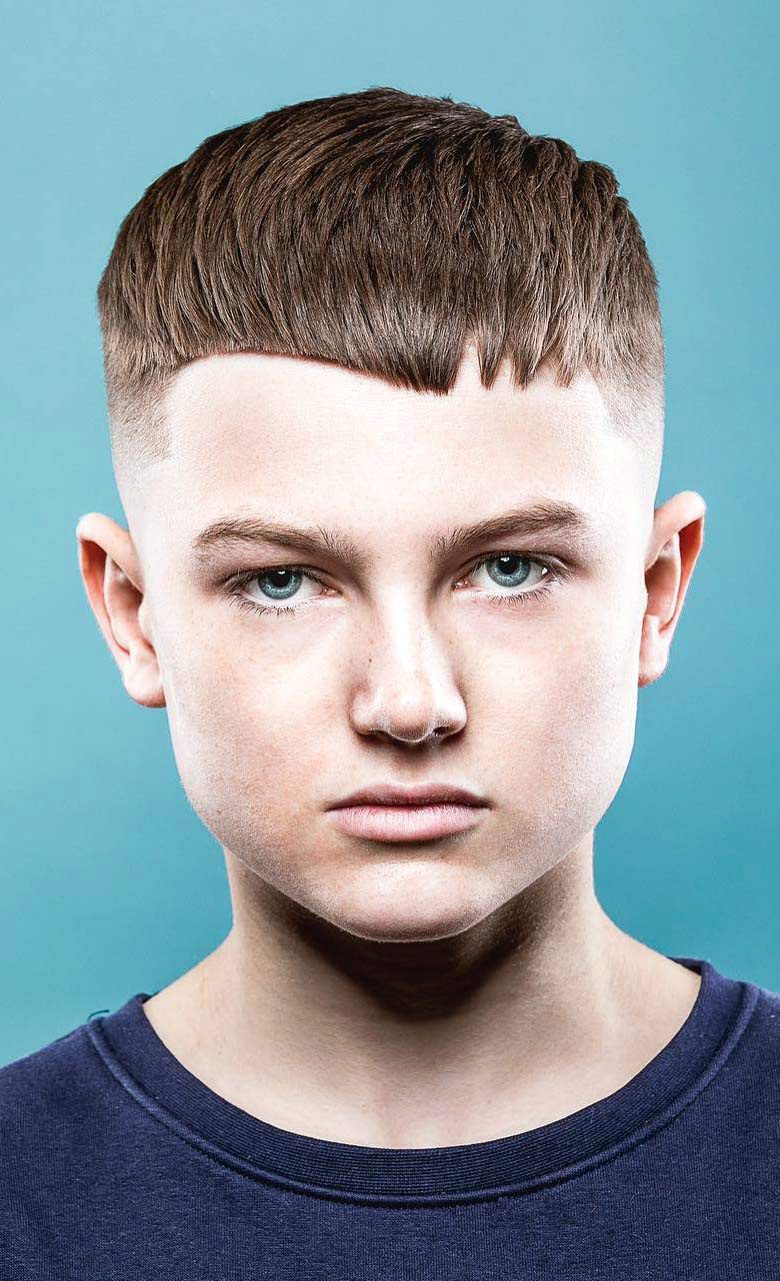 There are a couple of cool things about this haircut: the angular fringe and the chips on the right side. Another instance when it’s the bangs that are doing all the talking! 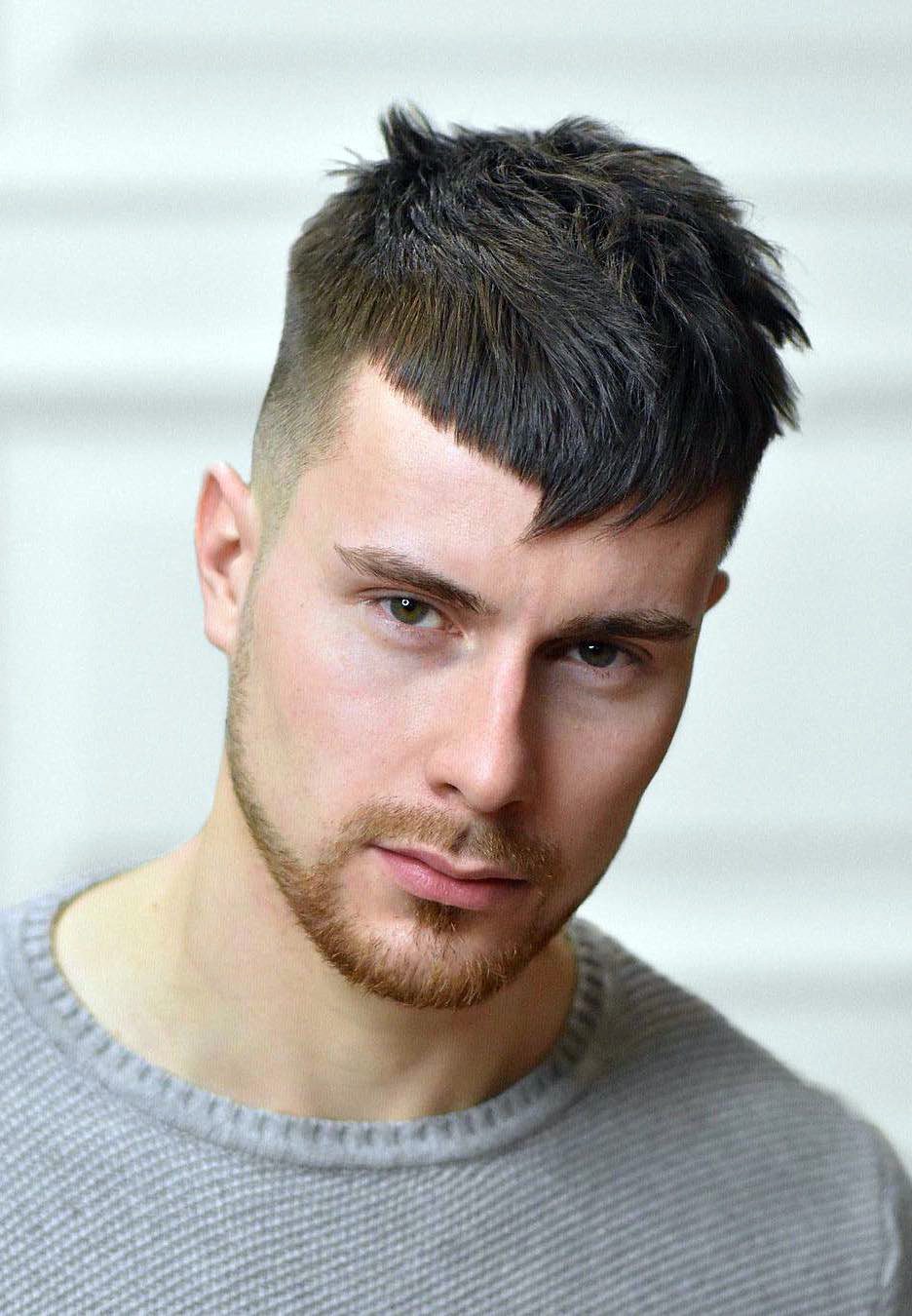 Here, the fringe is somewhat rounded and features a longer, pointed section in the middle. We think it’s also cool that it  echoes the choppy texture of the crown. 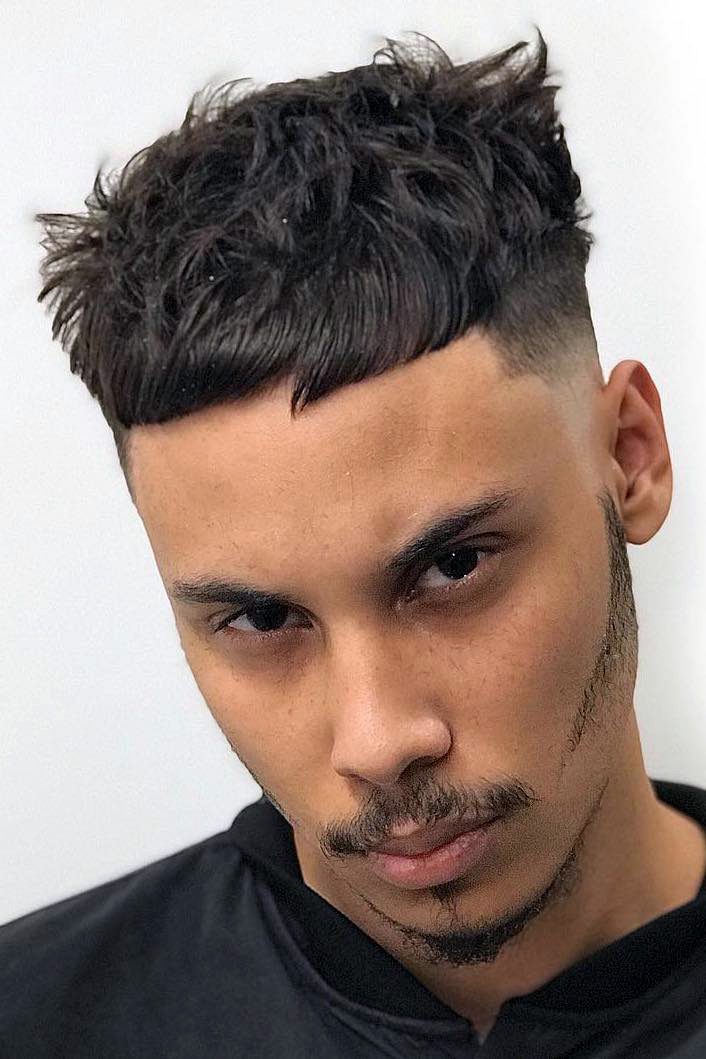 Try this for a trendy take on the classic Caesar fringe. Instead of one straight line cutting across the forehead, this is parted in the middle and the two sections have slightly different lengths. A messy texture at the top finishes off the edgy look. 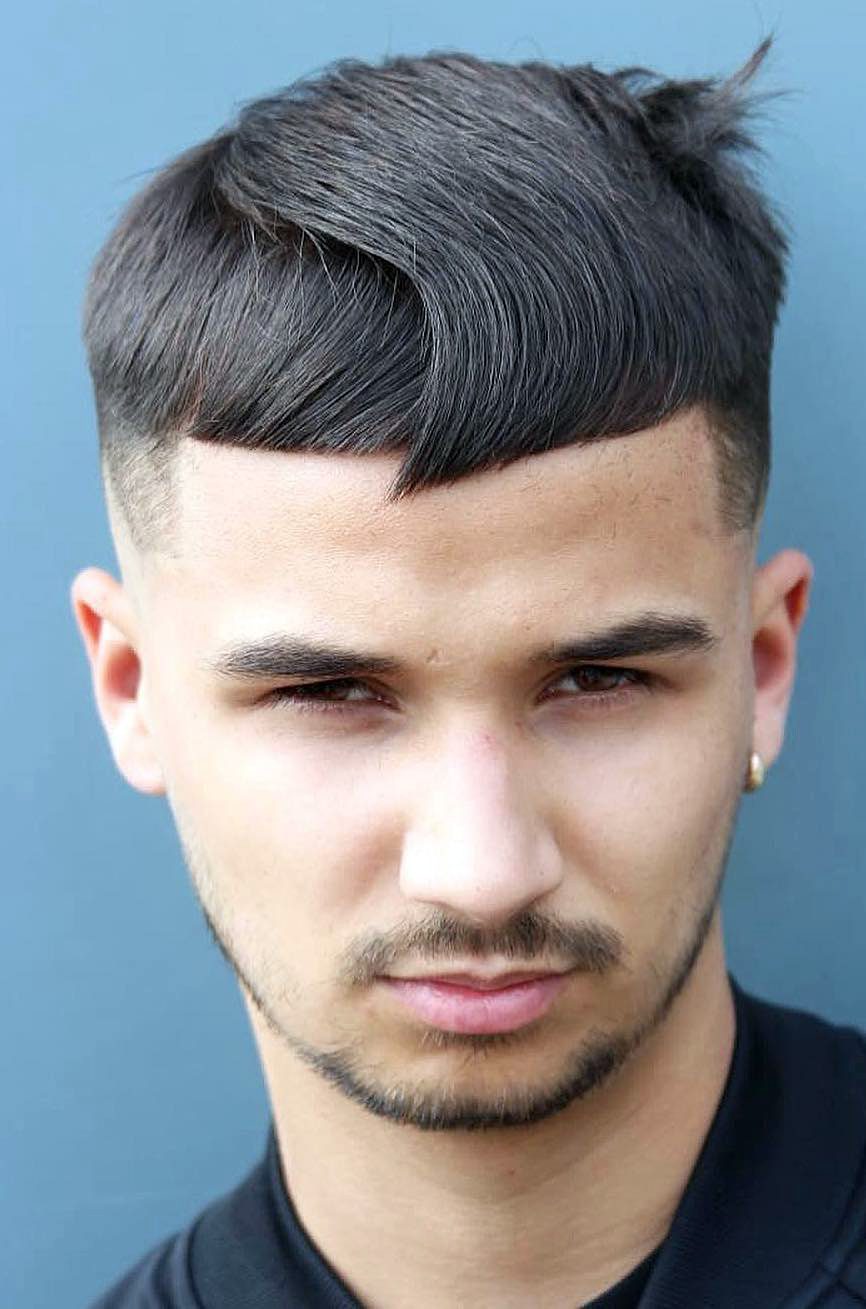 A fringe layered on top of another fringe — now this gives a whole new meaning to layered hair. What an imaginative way to style bangs, and we’re really loving those curves.

This haircut has some seriously stylish texture at the top that extends all the way to the fringe. Plus the undercut adds a touch of toughness. This reminds us of the emo bangs trend, but curly. The heavy fringe and top look really wild and dramatic — perfect if you’re going for a bad boy vibe. When you add a rocker edge to a charming head of curls, this is the hairstyle you end up with. To get the look, just let your thick curls go wild on one side while keeping the other side short and clean. This hairstyle features a nice piecey texture and an eye-grazing fringe that’s swept to the side. We think it’s a good style to copy if you’re growing out your hair. If you prefer it sleek and neat but a little offbeat, this is the fringe style for you. It looks like the classic bowl cut but a lot more stylish with its soft angular bangs and deep side part.

Looking for the most casual and fuss-free fringe style? This is it. Wear the top long with a lot of volume and sweep it to the side, while keeping the other side neatly slicked back. 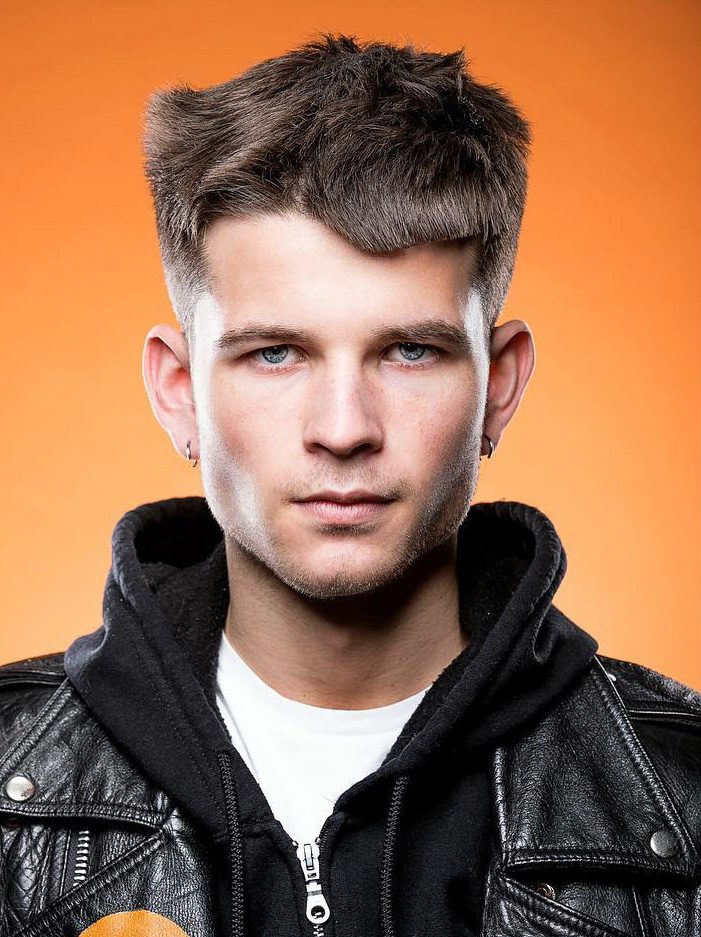 If you thought an uneven cut will never look trendy, this might change your mind. The fringe is deliberately lopsided and the crown has an asymmetrical silhouette as well, which all make for a unique look. 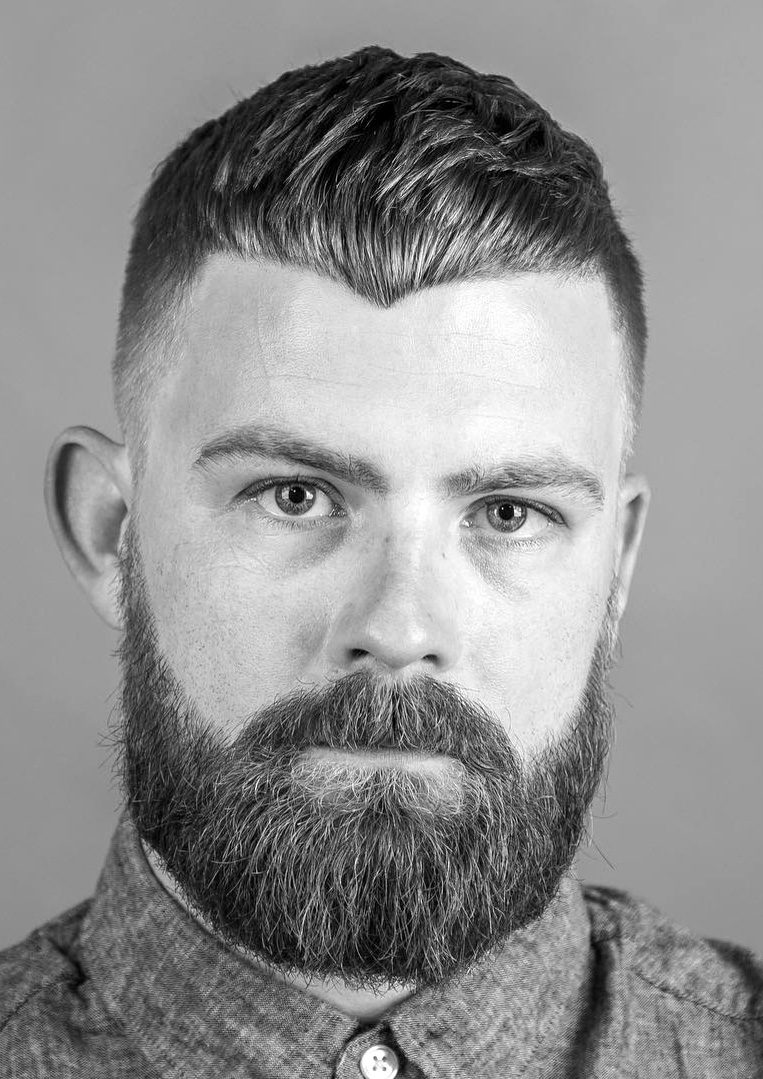 If you think an uneven haircut would be too hard to pull off, try something a little more subtle. This style has just a bit of asymmetry on the fringe, which actually looks like a widow’s peak.

If you liked Justin Bieber in the era of emo bangs, you might like this too. It’s practically the same fringe but with a low fade instead of long sides. 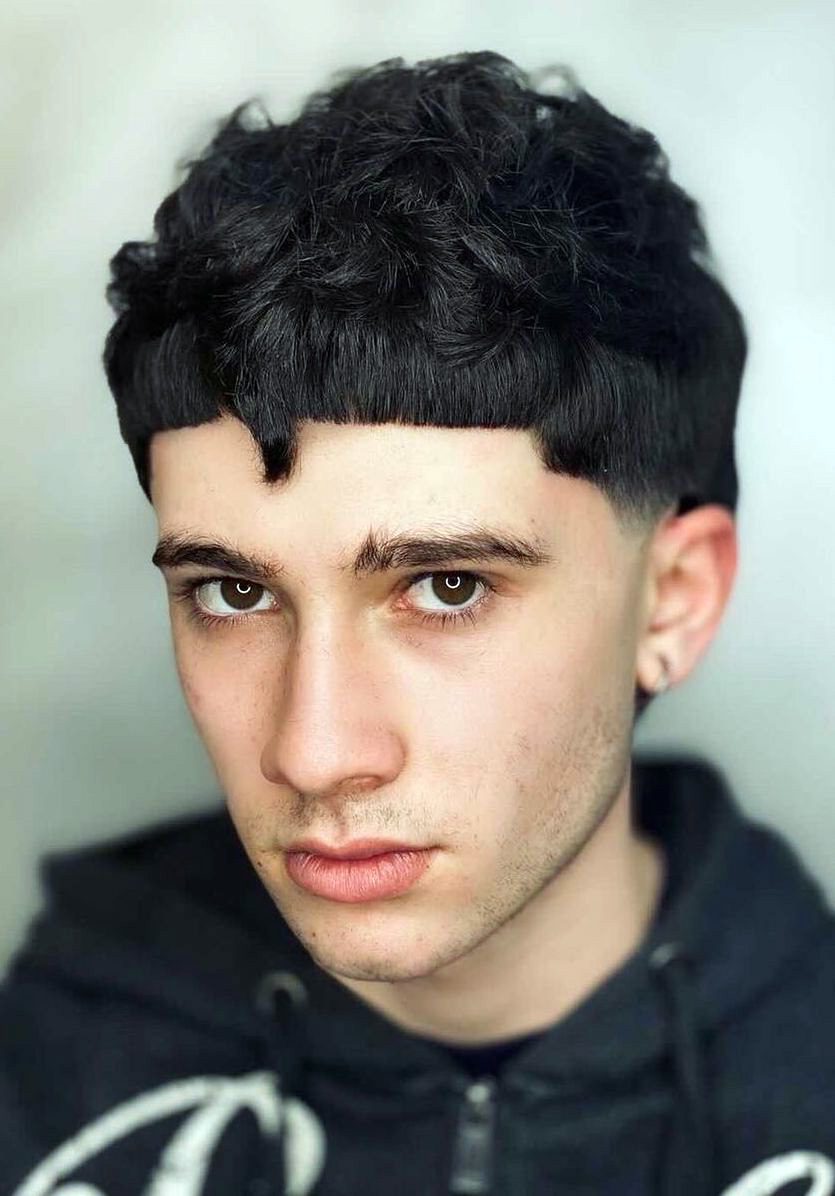 Angular fringe is still quite a very trendy look especially paired with french crop does wonders. Did you notice the short lineup with temple fade is quite a style in itself. The clean shave look pops the top quite well.

Collection of Outstanding Korean Hairstyles That are Going Viral this Season

Our Favorite Beard Styles – Types of Beards for Every Man

Give your beard the treatment it deserves

30+ Slicked Back Hairstyles: A Classy Style Made Simple + Guide