Slicked back hairstyles for men have been popular for over 100 years, especially since the creation of water based pomades. In the 1930’s, the slicked back side part hairstyle was created and kept very flat by the use of a lot of oil, and oil based pomade. Today, however, with the variety of hair products available, many different looks can be achieved.

In the 1950’s and 1960’s, the popular hairstyle was the Quiff. It was a popular variation to the pompadour hairstyle that many greasers would wear. The quiff featured a slicked back side part, but with some of the height and angle of the Pompadour and a touch of a Mohawk look.

For many years, the side swept has been dominating the realm of slicked back side part hairstyles. Men from differing lifestyles have made this style popular since the early 1900’s. It has even been seen in Hollywood more recently on Leonardo DiCaprio in the movie The Great Gatsby.

How to get the Slicked Back Side Part Hairstyle

The side swept is created by using a medium shine pomade and parting the hair, then combing it as flat as possible while making sure to curve along the direction of growth to blend in any cowlicks. By using a wide-tooth comb and a strong pomade on the hair, this hairstyle is possible even for men with curly hair.

By parting the hair at the corner of the forehead, or at the arch of the brow, a deep part can be created which works well with a textured side sweep. This hairstyle is very popular this year and with a strong-hold pomade and a sweep back and up of the hair, a very strong look is created.

Some things to remember when creating a slicked back side part hairstyle are:

Use a sea salt spray mainly on the top section of hair to help tame the hair. Spray onto hair, then create the desired part. Blow dry hair, making sure to comb the front of the hair across the face, the sides toward the back, and the back down flat. Depending on desired look apply a hair wax, pomade, or wet look gel with hands and comb hair into place.

The slicked back hairstyle with a side part is a timeless and versatile style, suitable for many men. It can be classic and reminiscent of the early 1900’s or updated to suit today’s styles. It can be modified for many facial shapes and should be considered by all as a worthy style. 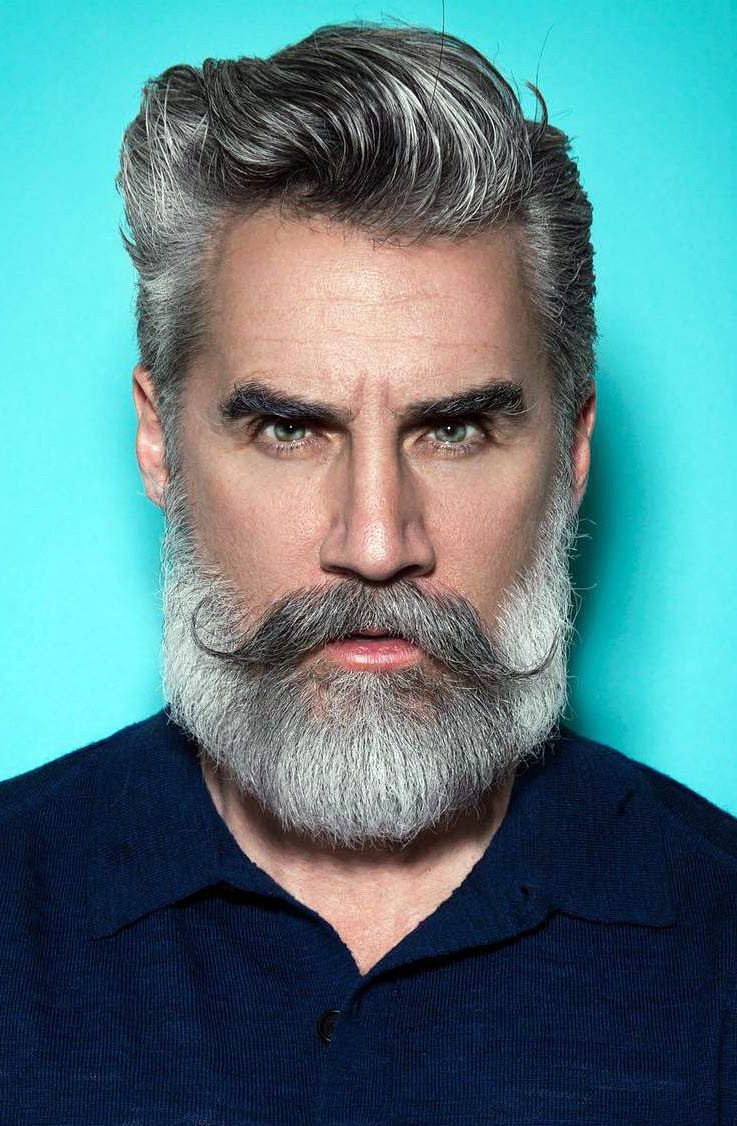 Slick Back with Side Part and Taper

If you’re one of the lucky ones and have plenty of hair volume to work with, this style is one you might want to consider. It projects sophistication and a lot of class. To get it simply apply a slight amount of product in your hands, just enough to tame the wild hairs and brush it backwards, then make the part and ensure your sides are brushed back as well. Make sure you don’t force it down too much, for this look the natural volume is key. 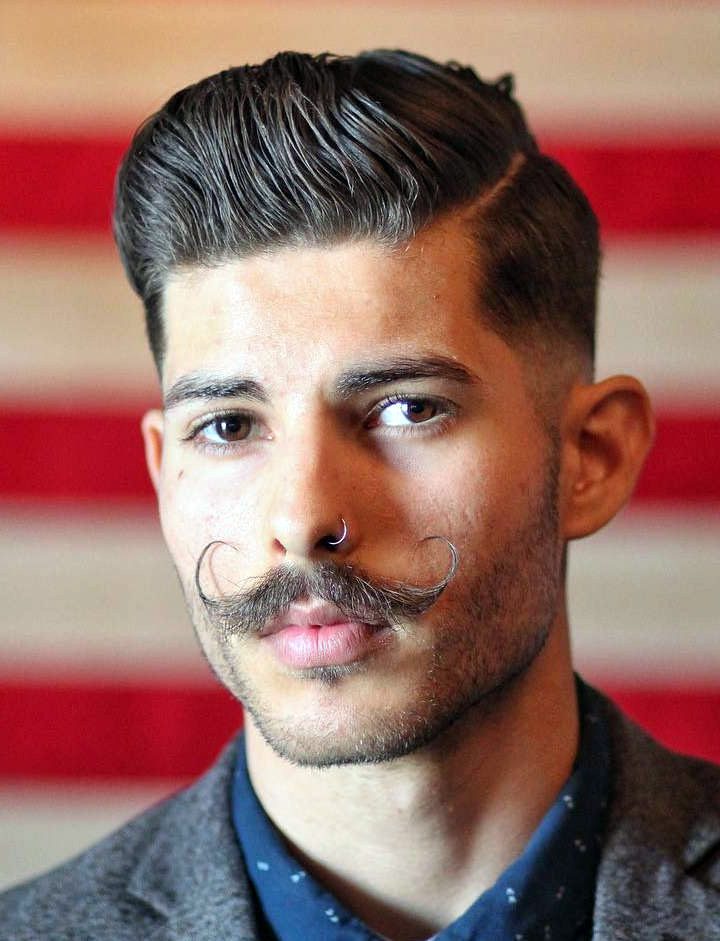 This clean, combed look is given an old-fashioned twist with the curly mustache. Just add a little stubble around the face and the resulting style is very, very manly! 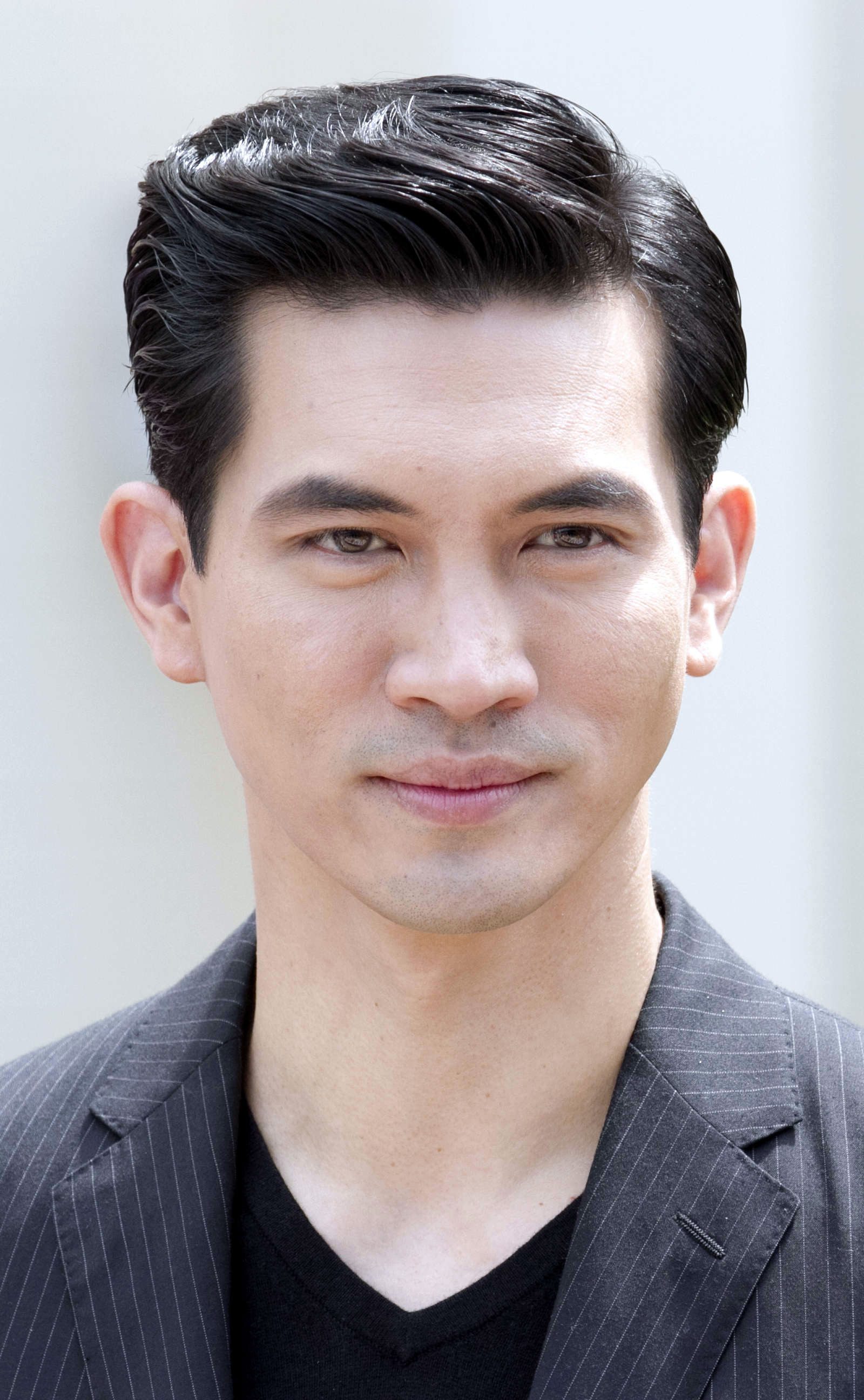 Classy Side Brush with Invisible Part

If you’re not a fan of having short hair as part of your cut, the good news is that slicked-back styles lend themselves particularly well to extra length on the sides. 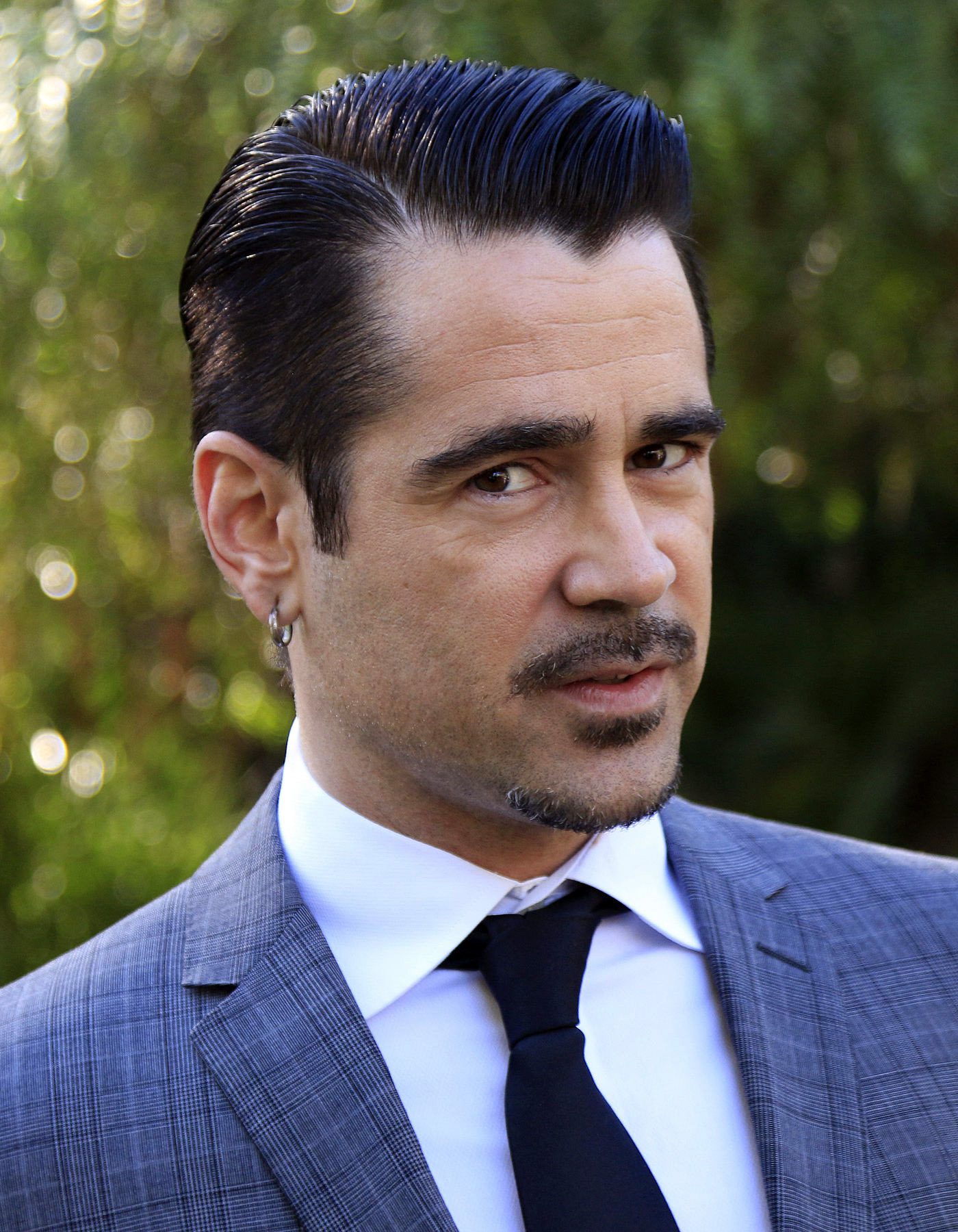 It might sound questionable, but slicked-back styles are great for those with a widow’s peak in their hairline. This thoroughly-gelled style also has a hint of the Wild West, with the light facial hair and sideburns.

Here’s an incredibly powerful slicked-back undercut. There are bounds of contrast in this style, with the long top hair, buzzed sides, and lion-like mane of facial hair.

Strict Slicked Back with Mid Fade

This clean, slicked-back undercut looks like something a mafia boss might wear. The close-cut sides and clean shave create practicality, while the slick on top is pure flare! It’s a classic: short on the sides, long on top. This slicked-back hairstyle is also brushed sideways, for a slightly more modern appearance.

Check out this perfectly-executed side-swept hairstyle. The hair is surprisingly short and doesn’t look at all greasy, so it actually feels surprisingly contemporary! 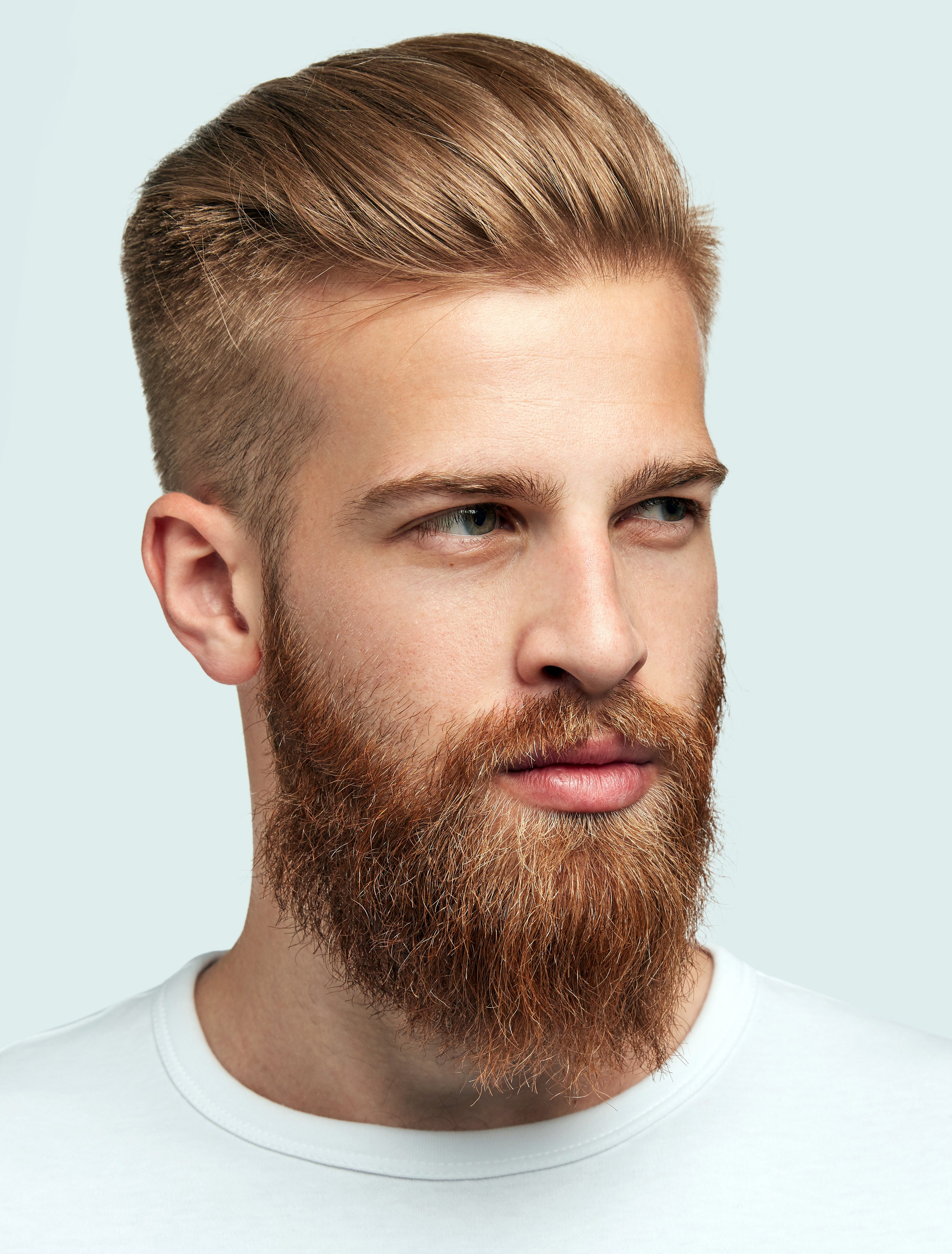 Here’s a more modern take on the slicked-back haircut: a pompadour-gone-undercut. Let your facial hair grow out long for a hipsterish twist. Side Part Slicked Back for Elegant Man

This youthful slicked-back look also features long sides, which is a pretty popular theme among Asian men. The glasses and clean-shave give off a sophisticated, modern vibe. Check out this simple slick, which has everything it needs: a side part, some length on top, short-ish sides, and light sideburns. It’s an 80s cut but doesn’t feel out of place today.

How’s this for a fresh take on the slicked-back side part? With a wide part and an unusually high fade, this really is a 21st-century cut. Side Parted Pompadour, by @menshairstyles
13/29

Combed Push Back with Thin Part

Check out this take on the slick-back, with plenty of smooth lines throughout the hairline. The curved hairline just above the ears is one element that really does catch the eye. 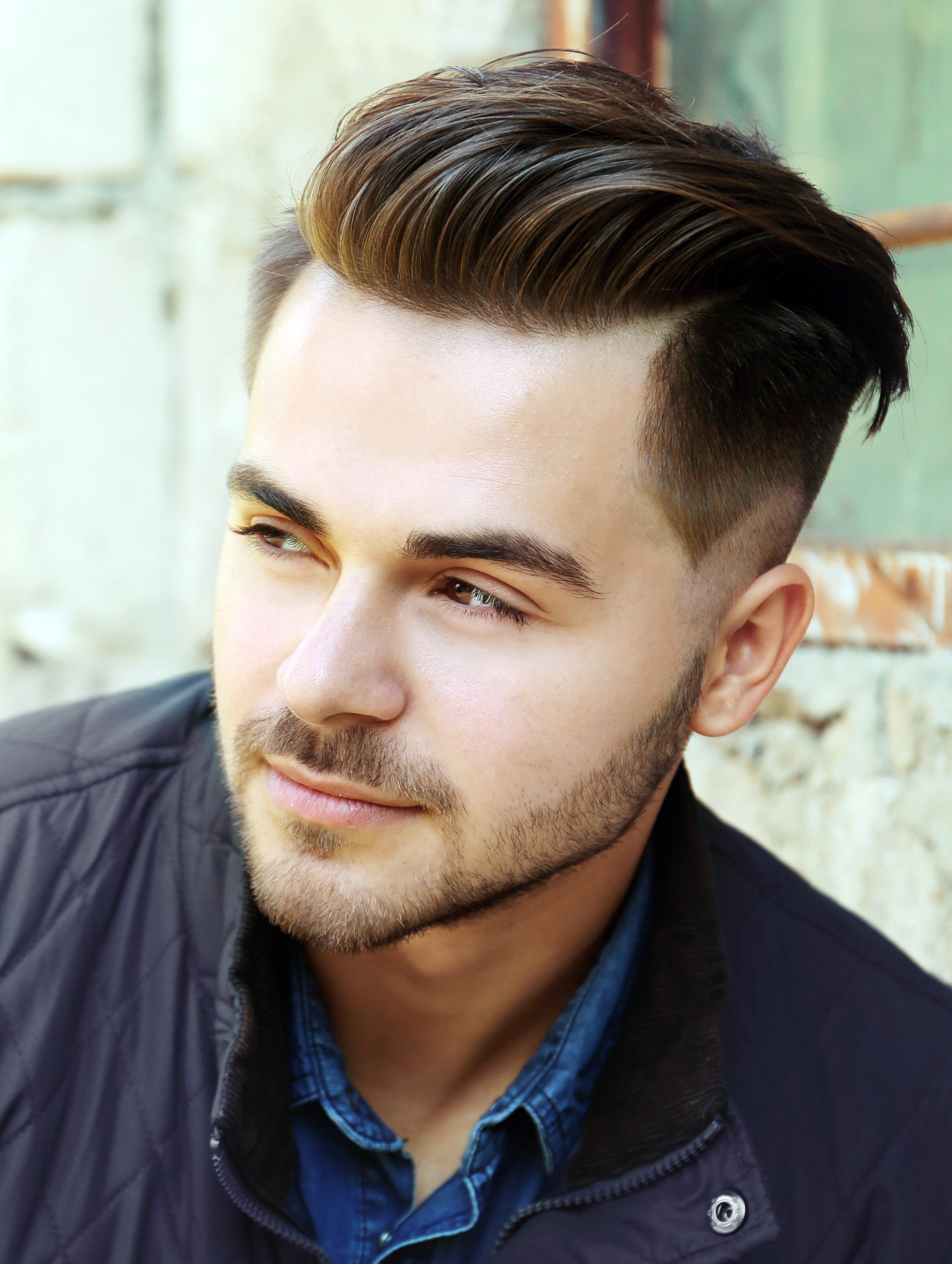 The slicked-back side part is a popular starting point for thousands of hipster haircuts, like this one. Notice how easily you can “refresh” this old style with a fade, an earring, and some facial hair.

Here’s another modern variation of the slicked-back hairstyle. It’s the fade on the sides that really lightens up this classic. 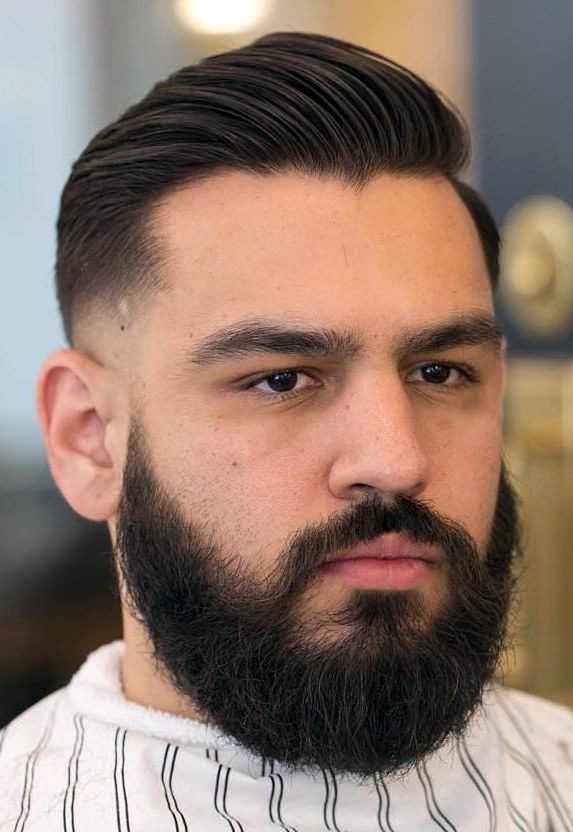 This textured, slicked-back pompadour really does stand out. Is it the side part? Is it fade? Is it the hairline? We’ll never quite know. Colin Farrel with a Slick Back 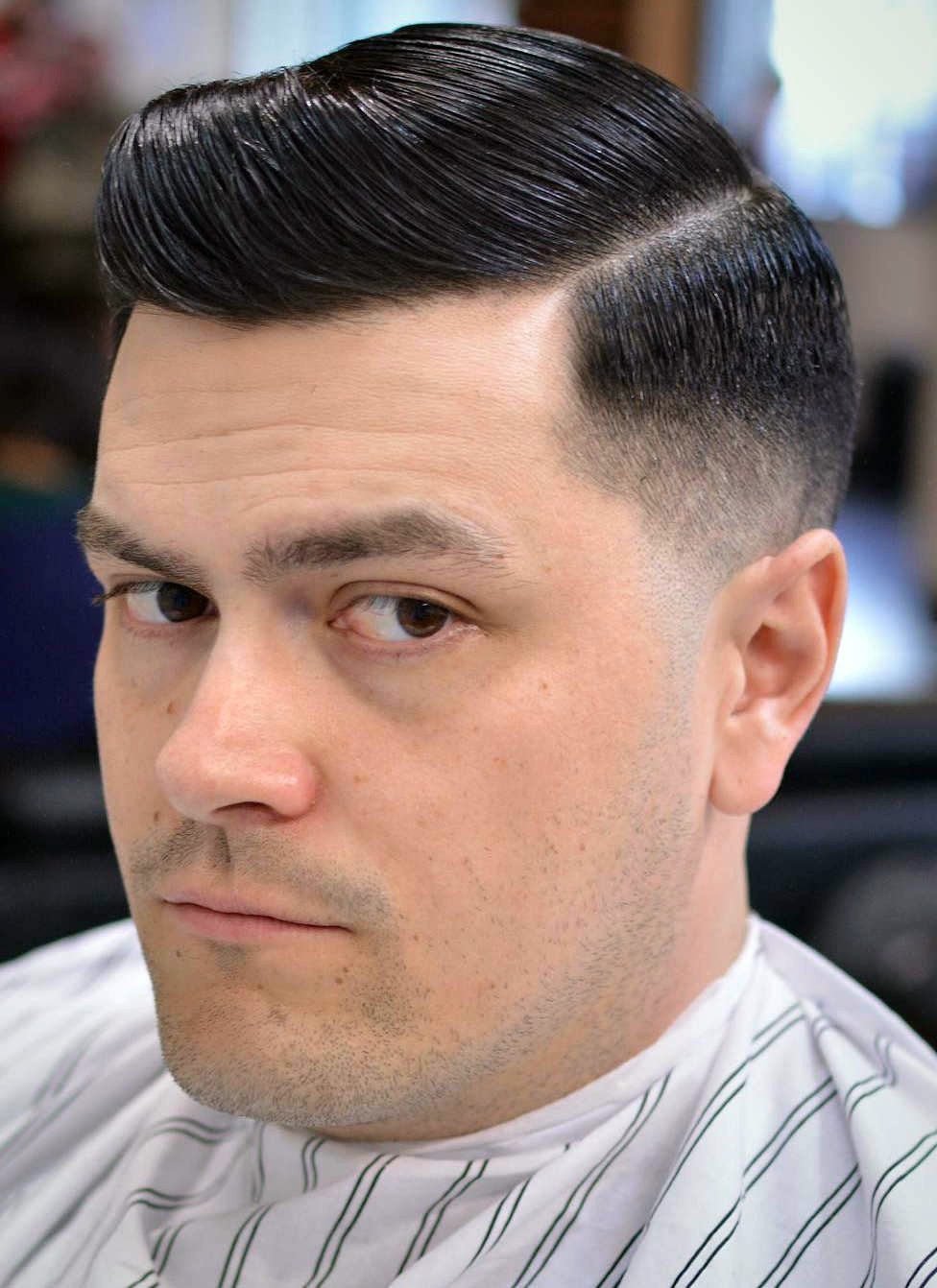 Temple Fade with Combed Side Brush 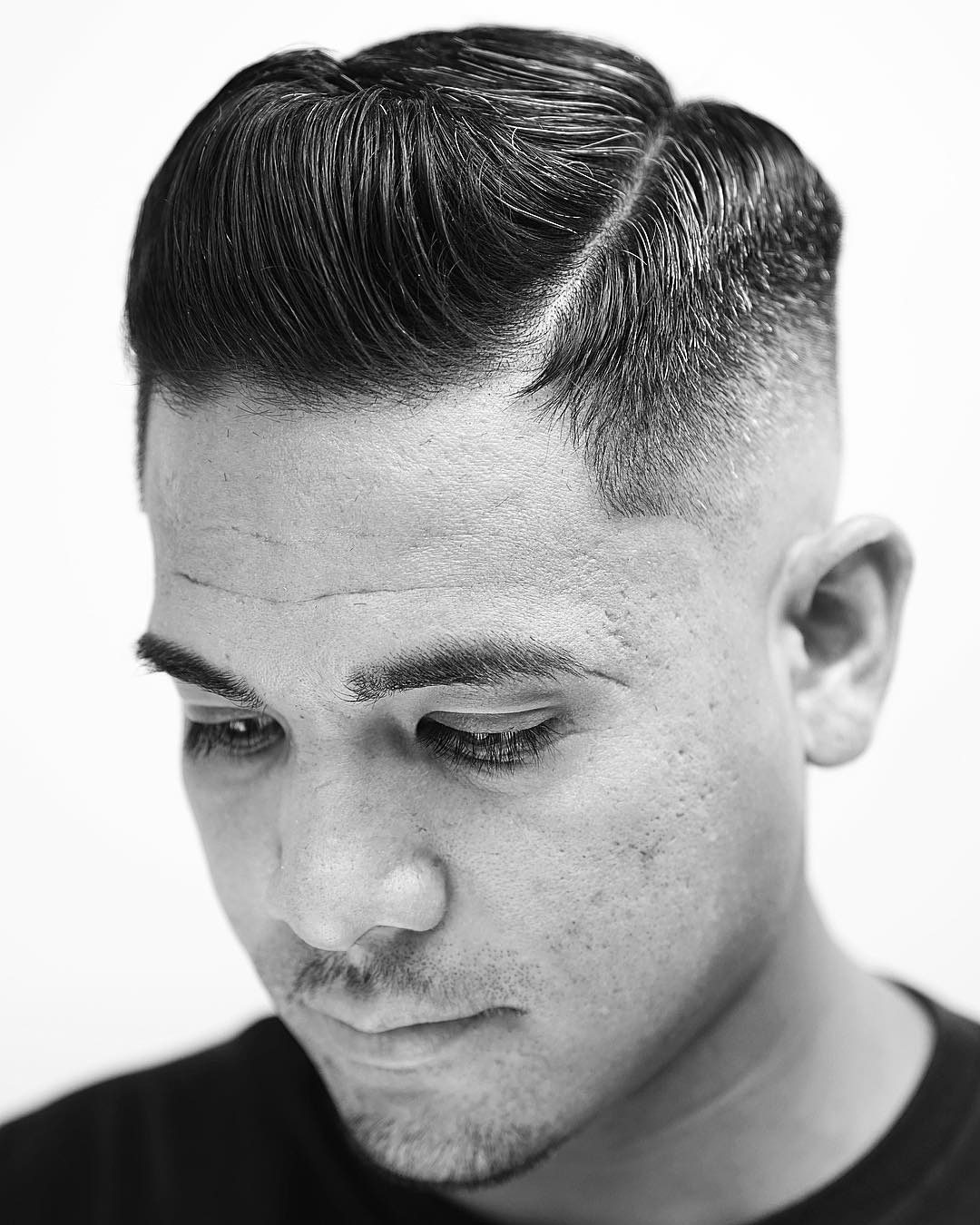 Sure Its Harmful but Undercut is Neat Pomped Slicked Back with Moustache

Viking Beard: For The Explorer in You