The modern cowlick is a unique hairstyle in that it’s different for almost everybody. Before discussing what exactly it is, let’s first clear up the term cowlick. A cowlick is a tuft of hair that grows out in an unexpected direction — the most common being the spiral shape that most have on the crown of their head.

As a style, the modern cowlick is all about letting your tufts do as they please. Most modern cowlicks are of a medium length and are slightly longer on top than on the sides. This cut inherently has quite a bit of texture, derived from the erratic nature of the cowlick(s).

How to Get a Modern Cowlick

You can choose to show off your cowlicks in many different ways, but in this article, we’ll focus on the most common.

Modern cowlicks typically start off with having your hair cut down to what can only be described as a ‘long Ivy League cut’ — that is to say a medium-ish top and slightly shorter sides.

Have your barber or friend cut your top hair down to around 2 inches with scissors, and slowly blend that into the sides, which should be shaved down to a number 4 — give-or-take.

Make sure that before cutting your hair, your hairdresser combs any tufts in your hair down as much as possible. That way, after being cut, they will return to their old glory and add texture to your hair by sticking out.

How to Style a Modern Cowlick

Once again, how you style your modern cowlick is completely up to you. The important thing, though, is to try not to hide any tufts or style them down — then it wouldn’t be a modern cowlick anymore!

Nevertheless, here are a few suggestions: 1) Slick the top back, 2) Comb your hair to one side with some gel or putty (feel free to use fingers or a comb), 3) Brush it up slightly. Side note: I would personally like to point out that some faint facial hair works very, very well with this style!

Here, the messy look of the cowlick is echoed in the spiked top. Then it transitions into a drop fade and tapered neckline, with a pair of line designs for added pizzazz.

While cowlicks need little to zero styling (they’re just there), some — such as this — look like they’ve been through the hands of a pro stylist. It is very elegantly done and provides the perfect finishing touch to this ‘do.

Cowlick and The Fringe

The cowlick is definitely a striking element of this hairstyle, but so is the fringe. This is a statement look from any angle!

It’s hard to decide which part of this hairstyle is more attention-grabbing, the messy cowlick or the angular fringe. Together, they make for a truly one-of-a-kind look.

Can we call this a very professional cowlick with sides being taper faded. That’s not it, the fade is dropped with the top being brushed back with some side to it. A very neat look there. 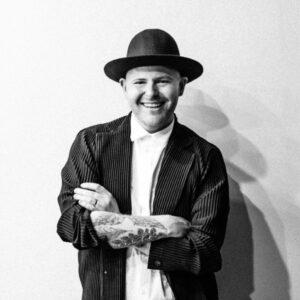 Danny Puopolo is an expert that works at Rakis, a professional hairdressing salon in Melbourne. His work has been featured in a variety of publications such as OK Magazine, Vogue, and INSTYLE. He has also managed classes for Shu Uemura Australia and Loreal Professional.

How to incorporate twists into your style and keep them up easily.

Step up your braid game

Your options just got bigger: find a unique style in the endless list of most popular haircuts in 2022